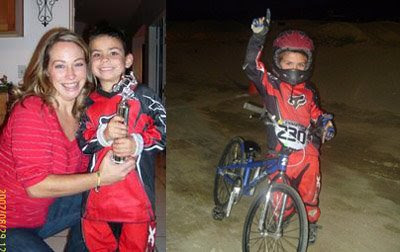 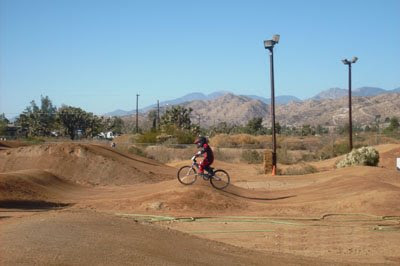 Last Friday, June 12th, Frances Chafe debuted as the first mother to race at the local American Bike Association Bicycle Motocross (ABA-BMX) track with her son, Nicholas, who races in the five and under Novice Class.

The Office Manager at Windermere in Palm Springs Main, Frances is dedicated to being an active participant in her son’s activities. Nicky has been racing every week at the Palm Springs BMX track, garnering trophies on a weekly basis, since last December.

His mother, always cheering him on from the sidelines watched a number of Dad’s riding each week with their sons. There were never any mothers out there and she decided there was no reason she couldn’t make race night a special mother-son event, just like the Dad’s were doing.

Now she’s a member of the ABA-BMX Association, racing in the Cruiser Class against men in their 20s and 30s, since there aren’t any other women racing in her Class. Frances is doing it to have fun with her son, but she did win a Third Place trophy in her first race!

Her words to other mother’s of biker children, “Besides having a lot of fun, it’s a great cardio workout. It’s also a great way to burn off those extra calories while doing something fun with your child!”

Many locals don’t know that we have our own ABA-BMX District in Coachalla Valley. Tucked away behind the ARCO20 gas station on Highway 111, across from the Target shopping center, is Palm Springs BMX

Thanks to Bonnie Chafe, Nicky’s grandmother, for writing and sharing this story. Instagram
Wishing you a safe and festive Cinco De Mayo 🙌

We think our real estate Jedis are the best in the

This Palm Springs masterpiece, known as "The Sutte

Find a new place to catch some rays 😎 on our li